USA Hockey's "My Why Tour" comes to the Centene Community Ice Center December 15th and 17th, 2021

USA vs Canada coming to the Centene Community Ice Center

FOR IMMEDIATE RELEASE U.S. WOMEN’S NATIONAL TEAM TO FACE OFF AGAINST CANADA IN ST. LOUIS GAMES FEATURING MATCHUP OF WORLD’S TOP TWO HOCKEY TEAMS WILL BE PLAYED ON DEC. 15 & 17 AT CENTENE COMMUNITY ICE CENTER IN MARYLAND HEIGHTS ST. LOUIS – Nov. 16, 2021 – Leading up to the upcoming Olympic Games in Beijing, China, the U.S. Women’s National Hockey Team will face Canada on Wednesday, Dec. 15 and Friday, Dec. 17 at Centene Community Ice Center in Maryland Heights. Both games are set for 7 p.m. CT and are part of the My Why Tour presented by Toyota. Tickets go on sale on Thursday, Nov. 18 at 10 a.m. CT at centenecommunityicecenter.com. “We’re excited to bring the My Why Tour to St. Louis,” said Pat Kelleher, executive director of USA Hockey. “Fans will be treated to watching the best two teams in the world compete in what is one of the very best rivalries in all of sport.” The St. Louis Sports Commission is partnering with USA Hockey, the St. Louis Blues and Centene Community Ice Center for the two-game series. Chris Roseman, vice president of the St. Louis Sports Commission, said, “We are thrilled to be hosting this great event in St. Louis. We look forward to welcoming the U.S. Women’s National Team and Canada and making sure everyone has a tremendous experience.” The Centene Community Ice Center, which opened in September 2019, is a state-of the-art facility and the only one of its kind within 500 miles of St. Louis. The facility is also the home practice facility for the St. Louis Blues. “We couldn’t be happier to showcase USA Hockey vs. Hockey Canada at Centene Community Ice Center prior to the Olympics,” said Lance Rosenberg, the facility’s general manager. “As we continue to help grow the sport of women’s hockey, these games will certainly become a memorable experience for the players and fans in the St. Louis region.” Team USA is expected to stage autograph signings for fans following both games. The My Why Tour is part of preparations for the U.S. Women’s National Team in advance of the 2022 Winter Olympic Games. Team USA is the reigning Olympic champion and will begin defense of its title on Feb. 3 in Beijing. To learn more about the My Why Tour, click here. 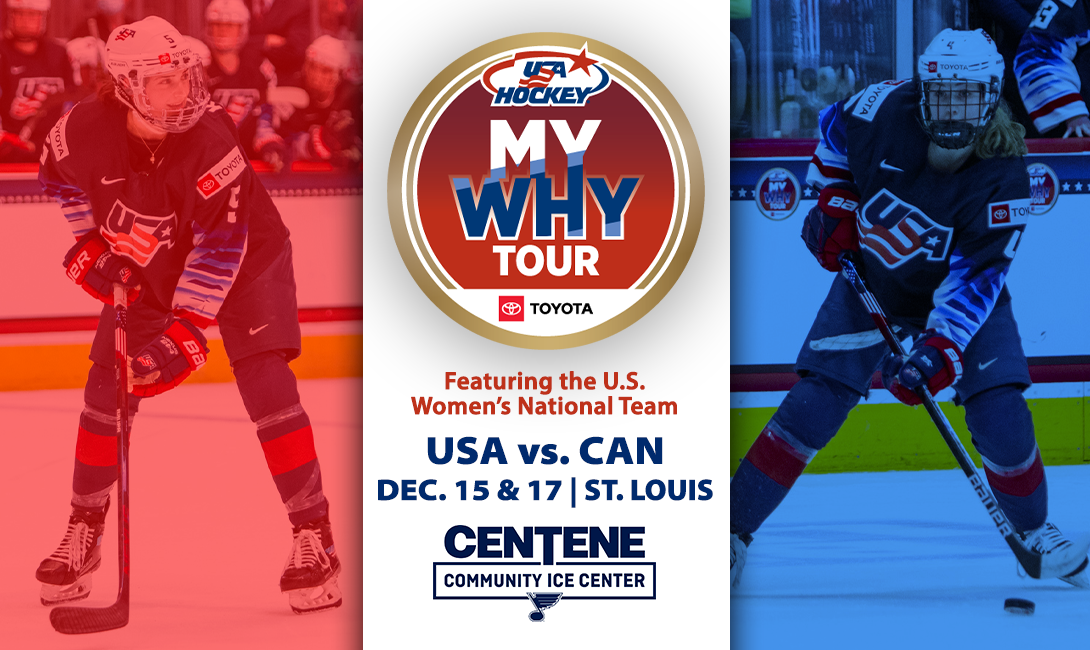 USA Hockey "My Why Tour"- USA vs Canada